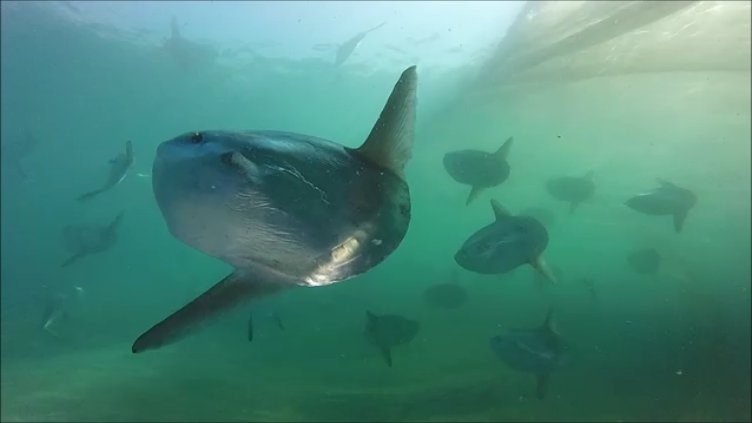 Knowledge gaps: To date the ocean sunfish is not included in any management plans or protective measures owing to large knowledge gaps in the species life history. The sunfish is targeted for human consumption across Asia, and they are frequently reported as bycatch across the world, with estimates suggesting this removes hundreds of thousands of individuals each year. Preventing the bycatch of these fish is extremely challenging as ocean sunfish distribution and movement patterns are not well understood, particularly in European waters. Collection of sunfish distribution data needs urgent prioritising to help to reduce bycatch, aid protective measures and boost their potential as a keystone species for eco-tourism ventures, as large, harmless, charismatic fishes that are highly tolerant of divers and boats. As such, increased efforts to understand sunfish movement patterns are highly recommended as this information is vital for the creation of sustainable management measures, including assessment of population connectivity and potential use of migratory corridors. This information can then be used to assess connectivity across international jurisdictions, define critical areas for the species and help fishermen avoid bycatch.

Telemetry tools: Pop-up satellite archival tags (PSAT) are highly valuable tools to assess fish spatial movements and alongside long-term use of acoustic transmitters and receivers, a telemetry based approach would significantly boost the current understanding of sunfish distribution and movement patterns. PIT-tags would also be valuable for recording survival rates from catch and release fishing (where practised) and data storage tags can offer valuable insights for conservation management plans.

Benefits within ETN: The ETN network offers a valuable means to characterise ocean sunfish movement patterns and behaviour which could provide vital data to reduce fisheries bycatch and help design protective measures for this vulnerable species. Through this extensive network, an opportunity has arisen to understand a broad ranging marine species that currently has no protective legislation, and whose current unpredictability of movement causes huge bycatch issues for fisheries. Since this species offers high value to coastal communities through eco-tourism industries, by understanding their movement patterns it may be possible to assist decision makers and conservation managers to adopt specific measures to protect this vulnerable species, reduce fishing bycatch and boost profitability for local tourism groups.