Fine-scale multi-species telemetry in lakes Most and Milada 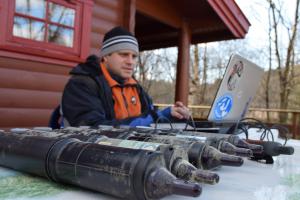 Submerged macrophytes play an important role beyond that of primary production, as they provide increased structural complexity and niche potentials for fish. However, most of the scientific attention on habitat use in fish and the influence of macrophytes have been given to small and shallow lakes, where the vegetated areas are well-developed and the availability of a large deep water refugium is absent or limited. Our goal was to gain a detailed understanding of the structuring effect the submerged macrophytes have on fish communities in deep lakes. In order to achieve this, we contrasted two newly formed deep lakes of similar size and colonization history, but one with and the other without submerged macrophytes. We used the latest developments in high-resolution positioning telemetry to assess individual habitat use and activity patterns in the different species of the multispecies assemblages in the two post-coalmining lakes – Lake Most and Lake Milada.

During the MacFish (Mac=macrophytes) project we tagged 264 individuals of six species – pike Esox lucius, European catfish Silurus glanis, rudd Scardinius erythrophthalmus, tench Tinca tinca, roach Rutilus rutilus and perch Perca fluviatilis and observed them from 3 to 11 moths (dependent on species) in both lakes. Beside that, temperature and light intensity of water column was sampled at two sites in each lake in 5 minutes interval. During sampling period, we gathered around 34 million of fish positions. These data were combined with other sampling techniques, such as echosounding, acoustic cameras, video cameras, electrofishing, trawling and gillnetting.

We now use the resulting data to overlap in habitat and trophic niche use, as well as activity patterns with high spatiotemporal resolution. Combined with consumption estimates in piscivorous predator fishes and life-history characteristics such as growth and age at maturation in prey fish, a comprehensive and detailed insight into the effect of submerged macrophytes on the fish community structures and dynamics are reached. The project provides novel basic research results that has important relevance for the management and restoration of water bodies.