Species description and status: The common dolphinfish (Coryphaena hippurus) is an epipelagic species with worldwide distribution, characterized by its fast-growing rates and migratory behavior. Commercial and recreational fisheries target this species across oceans. Commercial global captures of dolphinfish have increased over time up to 100,000 metric tons in 2008 (FAO 2019). Although no regular assessments exist for this species, there are no identified threats that could endanger the stability of populations, and, thus, the IUCN Red List of Threatened Species has classified it as “Least Concern”.

Regions of interest: Dolphinfish is a highly migratory pelagic species, distributed circumglobally between the latitudinal points 38°S and 46°N. Its distribution and abundance are highly influenced by hydro-climatic conditions being the sea surface temperature the main driver - the 20°C isotherm roughly marking its distribution with preference for waters between 20 - 30°C. Juvenile individuals are difficult to differentiate between the different Coryphaena species, making it necessary to define the population identity where co-exist. However, the overwhelming majority of fisheries of Dolphinfish worldwide target C. hippurus. 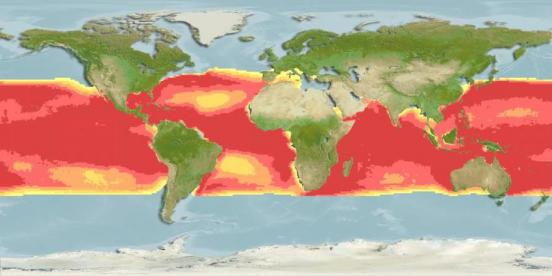 Knowledge gaps: Temperature is a major trigger for dolphinfish movements - temperatures below 20°C limit metabolism and growth and temperatures above 28°C tend to be suboptimal and promote their migration patterns (Norton, 1999). Palko et al. (1982) reported that the movements of floating objects (FADs) in the open sea could partly explain the migration and movements of dolphinfish. However, other hypotheses consider that pre-spawning and trophic needs can partly explain these spatial dynamics (Benetti, 1994). In the extreme distributional areas of the species, such as the Mediterranean, migration patterns are particularly relevant as they may explain the seasonality of catches. A key knowledge gap is in the identification areas of the Mediterranean areas where the species appears and spawn, and how will be affected by the global warming (Key knowledge gap 1). In addition, it has been suggested a genetic migration of adult individuals from the Atlantic to the Mediterranean through the Strait of Gibraltar, similar to that of Bluefin tuna (Thunnus thynnus), coinciding with the spawning season of these species. However, this hypothesis has not yet been empirically confirmed (Key knowledge gap 2).

Telemetry tools: Some authors have used satellite tags (including the Fish Ecology Lab at the Mediterranean Institute for Advanced Studies - IMEDEA) to show linear distance migrations of up to ca. 2000 km and show how cyclical annual movements can occur among largely distant areas spanning several jurisdictions. These works have demonstrated the existence of sub-regional defined migration patterns, including the Eastern Pacific off Mexico and Baja California Peninsula (Marin-Enriquez and Muhlia-Melo, 2018) and in the Western-Central Atlantic (Merten et al., 2014), but poorly contributed to the Key knowledge gaps with interest for the ETN. In addition, the data on movement for this species generated by satellite tags is extremely scarce, is very limited on time and tagging is particularly challenging in such thinned-bodied individual.

Benefits within ETN: Several authors have demonstrated the potential of using Acoustic Tracking in this species and the use of using drifting FADs for monitor their movements (Girard et al., 2007; Taquet et al., 2007; Hernández-Tlapale et al., 2015). The shift to the loosely-coordinated set of existing regional Telemetry initiatives of this species (particularly in the Mediterranean area) to a more efficient and integrated pan-European biotelemetry network embedded in the international context promoted by the ETN, provides an exciting opportunity to address key knowledge gaps in this species trough collaborative efforts.

Marin-Enriquez, E., and Muhlia-Melo, A. 2018. Environmental and spatial preferences of dolphinfish (Coryphaena spp.) in the eastern Pacific Ocean off the coast of Mexico. Fishery Bulletin, 116.