Species description and status:  The brown trout (Salmo trutta L.) is an ecologically, culturally and economically important species of salmonids native to Europe (Figure 1). Brown trout spawn in freshwater, they emerge from the eggs as alevins, and quickly develop into fry once they begin to feed on their own. As they grow, they develop into parr. Later, sometimes within the first year, sometimes after 8 years, parr smoltify and become smolts1. The process of smoltification is to prepare them for their entry at sea and includes behavioural, morphological and physiology changes2. Migration to sea is however facultative in brown trout. The species is partially migrant, where some individuals remain in freshwater their whole life (known as residents, or brown trout) and others migrate to sea (known as anadromous, or sea trout). Studies in the last decade or so have however demonstrated that the S. trutta appear to display a so-called migration continuum because they appear to display an infinite number of migration patterns and life-history strategies3,4,5. Regardless of the strategy however, the trout spawn together in their rivers of origin (i.e., homing behaviour). (Image above by Kim Birnie-Gauvin ©)

The underlying mechanisms that lead juveniles to choose residency or migration are still poorly understood, but it is thought that metabolic and/or growth rate may be related, with high metabolic rate and/or fast growing individuals migrating to sea to sustain their energetic demands6. This is because the marine environment offers greater food availability. Most smolts migrate in the spring time, though recent evidence supports the presence of an autumn run of migrating juveniles3,5,7. Current population estimates and management strategies fail to include these autumn-migrating juveniles, leading to severe population underestimates and return rate overestimates.

At sea, most sea trout appear to remain relatively close to the coast to feed, with some residing in fjords (e.g., in Norway), though others do migrate long distances8,9,10,11. Sea trout are often compared to their close relative the Atlantic salmon, but tend to be underestimated in their migratory capacity5. They may spend between a few months to a few years at sea before migrating back to their natal river.

Brown trout are currently considered “Least Concern” by the International Union for the Conservation of Nature and Natural Resources (IUCN)11 though the anadromous part of populations (sea trout), along with many lacustrine stocks have markedly declined in some locations12,13. This decline is thought to be due to pollution in most instances, and from impacts from salmon farming12,14. 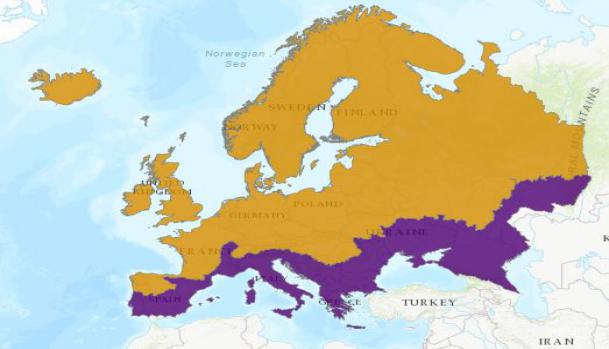 Telemetry tools:  Various telemetry tools are applied to study the movement and behaviour of brown trout both freshwater and marine environments. In freshwater, PIT and radio telemetry are rather common. For anadromous individuals, and in marine environments, acoustic telemetry is most common. Data storage tags have also recently been used to investigate the more detailed migrations and habitat use of sea trout in marine environments. PSAT telemetry may be feasible for long migrating populations with individuals large enough to withstand the size of the tag; as PSATs become progressively smaller, this will certainly be an area of interest of sea trout researchers.

Benefits within ETN:  Using the ETN to further characterize trout movements and behaviours as well as their repeatability and drivers over the species’ distribution would greatly enhance our ability to better manage this culturally and economically important species. During their migration, sea trout can travel through waters of many countries so joint research efforts, sharing of infrastructure and international collaborations are required. This is also relevant to freshwater systems as trout have been observed to visit both near and distant rivers. ETN can certainly help track these “straying” behaviours. In addition, ETN would give necessary insights in environmental preferences and potential barriers encountered during their journey.