Species description and status: The Atlantic cod (Gadus morhua L.) is one of the most commercially important fish species in the North Atlantic where it is widely distributed. Within the European coasts the northern distribution limit of Atlantic cod is as far north as Svalbard and its southern limit in the Bay of Biscay, spanning also adjacent seas, such as, the Baltic and the North Sea (Figure 1). The Atlantic cod is a demersal fish inhabiting a wide variety of habitats in marine, and less often, brackish waters1. It is most commonly found at continental shelf habitats at depths of 100-200 meters but has been caught in much deeper water2. Spawning grounds are commonly at the lower range of the depth preference, larvae drift passively and young of the year settle in coastal waters were juveniles often spend their first years. Adult cod moves further offshore to forage but a wide variety in foraging migrations is observed within the species2. Many populations are primarily resident whereas others engage in long range foraging migrations often, but not always, with homing to spawning grounds3. This variation in migration, as well as other life history traits, and environmental preferences may vary across the Atlantic cod distribution from south to north4. Atlantic cod can reach 30 years but individuals older than 10 years are rarely caught in highly harvested populations. (Image above by Erlendur Bogason ©) 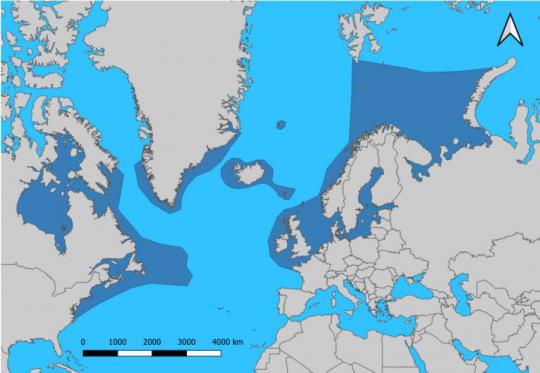 Historically, Atlantic cod has been severely overfished and population declines were observed for most regions in the mid to late twentieth century5. Many populations in Europe (e.g. Western Baltic) have not recovered and Atlantic cod is considered vulnerable by IUCN6. In more recent years some stocks are considered stable although for many stock recruitment has gone down despite reduction in fishing mortality. This applies even to relatively large stocks such as the Northeast Arctic stock and the Iceland stock7,8. The International Council for Exploration of the Sea (ICES) advise currently varies by stock starting at no take.

Knowledge gaps:
Compared to many other marine fish the Atlantic cod has been extensively studies. Nevertheless, there are still many knowledge gaps, particularly for populations that traverse a large geographical range through their lifecycle. The following questions are among those of current relevance to Atlantic cod conservation and management and can be addressed by acoustic telemetry.

Regions of interest: Atlantic cod has a wide distribution across Europe and the regions of interest spans much of the North Atlantic. Specific attention may be given to areas where telemetry networks can cover migratory routes between life stages, such as juvenile and foraging and foraging and spawning sites, as well as regions where climate-driven distribution shifts may be predicted.

Telemetry tools: Different telemetry tools have been applied to study the movement and behavior of Atlantic cod in Europe. Further advances are likely to be made using a combined approach. Acoustic telemetry is often appropriate, such as were populations are stationary, engage in short migrations or are expected engage in homing. Moreover, acoustic telemetry may be the tool of choice for juvenile or young individuals inhabiting coastal regions as well as for studies of anthropogenic, environmental and temperature effects on short-term behavior and to examine the effect of different management tools such as marine reserves. To examine long term migrations and distribution shifts data storage tags are still underutilized. Finally, strategically placed lines or systems of acoustic receivers could be useful to understand and track long migrations.

Benefits within ETN: Most studies of Atlantic cod movement and behavior have been conducted on a national level and by using the ETN comparisons and generalities could be drawn on Atlantic cod behavior across regions. Moreover, pan-national studies are likely to be particularly useful for predicting the effects of global change on Atlantic cod in coastal waters and for examining the ongoing evolution of Atlantic cod migratory strategies. On the long term, the ETN network could answer larger scale questions, such as on population variation and plasticity in migration and drivers of distribution shifts.