Activity and distribution of fish in the Rimov Reservoir (TeRi) 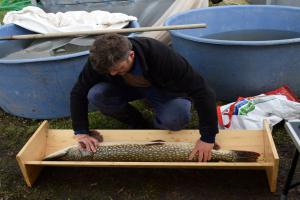 The TeRi project was primarily focused on understanding spatiotemporal changes of fish distribution in the Rimov Reservoir, Czech Republic – Te stands for Telemetry, Ri for Rimov. The reservoir has a canyon-shaped morphology, which is typical for many reservoirs in Central Europe . Such morphometry represents an ideal model for fish behaviour studies under heterogeneous environmental conditions as all biotic as well as abiotic factors gradually change from rich tributary towards the poorer dam area of the reservoir. Limnological research was established immediately after reservoir filling in 1980 and succession and distribution of the fish community is monitored on a regular basis since then. The aims of the TeRi project were i) to make link between observed general patterns of fish distribution in the reservoir and their individual behaviour; ii) to relate fish individual behaviour with specific conditions of canyon shaped reservoir; iii) to compare behaviour of the same species between conditions of canyon-shaped reservoir and conditions of rounded oligotrophic lakes we studied in previous years during the MacFish project. In total, we tagged 112 individuals of six species – pike Esox lucius, European catfish Silurus glanis, pikeperch Sander lucioperca, roach Rutilus rutilus, bream Abramis brama and perch Perca fluviatilis. Over 90 Lotek receivers recorded tagged fish for 3 to 11 months (dependent on species). Altogether we gathered around 22 million fish positions. Alongside telemetric observation, automatic recording of temperature and light intensity was carried on using 60 probes located within the reservoir.